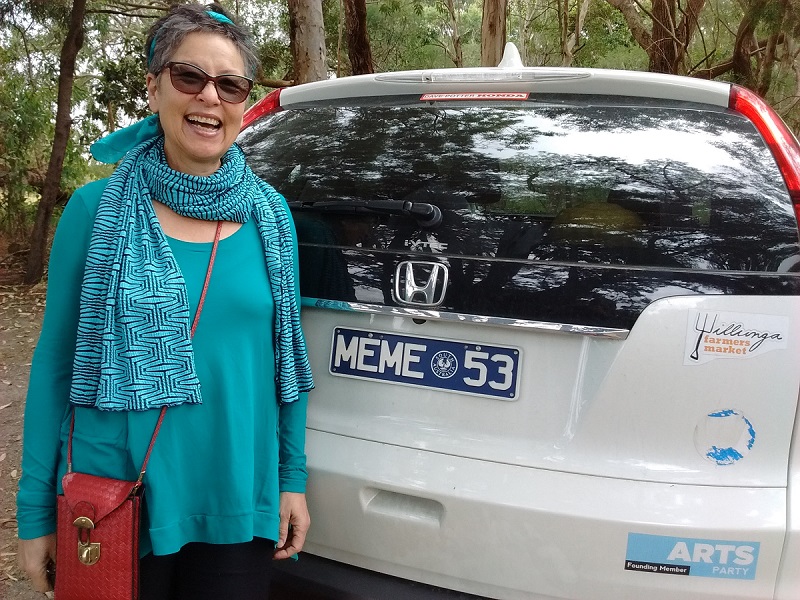 I met Mémé my first week in Willunga. It was an opening for Aboriginal artist Gavin Wanganeen at Willunga Gallery, mounted at Hardy’s Tintara Cellar Door (winery).

Mémé Thorne is a well-established actor in Australia. She’s also an arts enthusiast, and at the Wanganeen opening she promised she’d introduce me to life in the area once she got back from a hiking expedition in Asia.

New Year’s Day I received a text from Mémé. She wanted to know if I was ready to visit some winery cellar doors to ring in the new year? I said Yes and she arrived in 15 minutes.

I climbed into Mémé’s custom-plated Honda and we headed to Avril Thomas’s Magpie Springs. Avril made us coffee and opened the gallery space just for us. It’s currently exhibiting Small World, a collection of 240 postcard-sized works by 200 artists from around the world. The show closes January 15, 2017.

The works are an even mix of local and international artists working in water colours, oil, acrylic, pencil, mixed media, and other media. It includes a beautiful piece by Avril Thomas, herself a portrait artist.

Avril toured Mémé and me around the property, including her studio. There she showed us all the envelopes that the small works arrived in, including a stamp-covered envelope from the USA.

Magpie Spring’s cellar door was not open for business, but Avril did show us a surprise in the corner of the property: an impressive bouldering/climbing wall. I used to live with a climber, and Devin would have been smacking his lips at this wall.

We did a sticky beak at nearby the K1 Geoff Hardy Wines cellar door but they were closed for New Year’s Day.

“I want to see the Cube,” Mémé enthused as she steered her car north on Olivers Road. “I’m hoping it might be open by now.”

The D’Arenberg Cube is a radical structure that D’Arenberg Winery has almost completed. It sits atop acres of vineyards and it looks like a Rubik’s Cube, mid-roll. Adelaide’s InDaily.com.au calls it a “Willy Wonka’s Wine Factory.”

D’Arenberg wasn’t open either, but Mémé recommended I return there with someone willing to buy me a posh lunch.

We had better luck at our next two stops. Coriole Vineyards‘ terrace restaurant was hopping and I was able to catch a few tastes of Coriole’s rosé and Fiano—an Italian-style white wine I hadn’t heard of before.

A few vineyards over, we parked under a tree at Samuel’s Gorge winery, named for the serpentine Onkaparinga Gorge that it perches over. It was busy here too, but I managed to sample a few reds including their Grenache, Tempranillo, and Mourverdre.

Ready for a snack to accompany our next tasting, Mémé and I rounded off the day with a garden table at Red Poles (Brick Kiln Shiraz). It’s a woody, funky, relaxed place with cheese and paté platters and a very tasty sparkling Shiraz.

As we chatted and chewed, Leith from a nearby table came over to say hello. He introduced himself as the Willunga Postmaster and said he and his partner Sue lived in Willunga’s old Post Office and Telegraph building. He invited Mémé and me for coffee the next morning and we gladly accepted.

The next morning that coffee date would lead us to more sparkling wine, homemade quince jam, a ride on a Harley-Davidson, and a gift of a nine-foot snake skin…

(View these wineries on a map.) 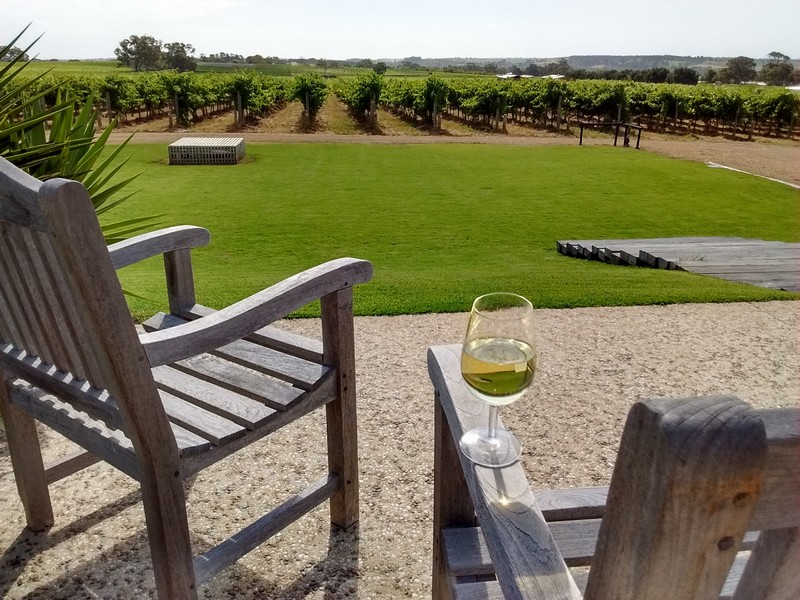 New York Times Magazine has proclaimed the term “cellar door” is “beautiful to the ear” and “purely harmonious.”

However, as a Canadian visiting one of South Australia’s nascent wine regions, I say that a cellar door (winery tasting room) is a place you can cycle to, sample wine, get back on your bike, pedal about 200 metres, and repeat.

I found this was true with McLaren Vale’s McMurtrie Mile a few days ago. It’s a rural road with a number of very eclectic cellar doors. My host Jared and I didn’t linger at any because, mysteriously, these cellar doors close in the ideal wine-sipping and tapas-tasting hours between 4 and 6pm.

I find this confusing as we in Vancouver have passionately taken to this time we call happy hour as an ideal time to have a glass before you head home after work. But maybe that’s just me.

To prove I am no weekend pedal-pushing sissy, I cycled up the Willunga Hill on a borrowed mountain bike. It’s a 250-metre ascent over 3.7 kilometres—challenging enough to be part of the route for the annual Tour Down Under road bike race.

I continued north along the paved, roll-y Range Road and then pointed the bike down a narrow laneway called the Kidman Trail. It was a steep gravel descent, but signs alerting me to the presence of koala bears kept me attentive.

Finally, I rolled onto the paved roads of McLaren Flats. The nearest winery was Kangarillo Road Vineyards and Winery and I had just thirty minutes before the clock struck five.

At the winery I quickly discovered that a “cellar door” is not a musty, rusty place with old barrels and cobwebs. The Kangarilla tasting room was positively arty.

I sampled a rosé with strawberry and poached pear notes, a Pinot Grigio with hints of coffee and fresh cut grass, a Duetto with aromas of citrus marmalade and crystallized ginger, and settled on a glass of ‘Street Cred’ Moscato suggesting ripe pear and Turkish Delight.

After pouring me a very generous glass of the sweet white wine, the cellar door staffer invited me to relax on the sun deck while she and her colleague packed up and went home. I availed of her offer and spent the rest of my “happy hour” slowing savouring Moscato until the wind picked up and pushed me to dinner. 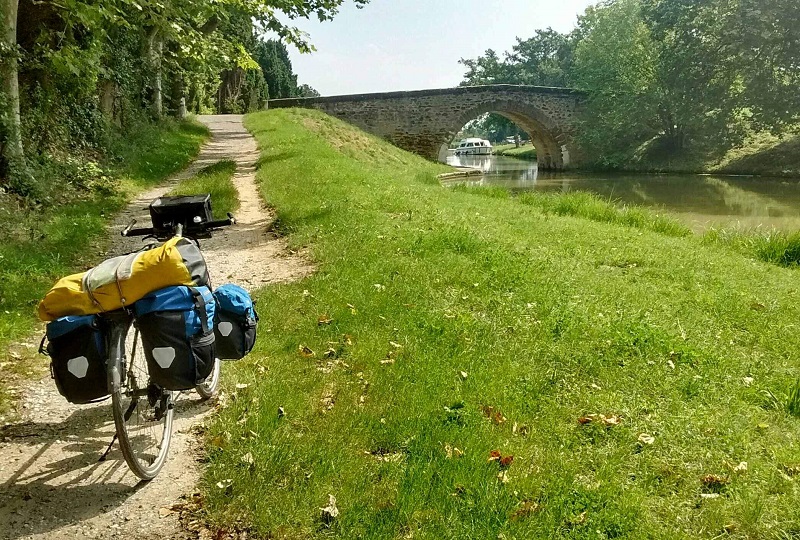 Hey hi! Check out my newest stories—a bike adventure along a historic canal that runs 500 kilometres across the south of France. The canal connects the Atlantic Ocean to the Mediterranean Sea. It’s called Le Canal des Deux Mers—the canal of two seas.

I solo cycle-camped the Canal de Garonne, the Canal du Midi, a section of Mediterranean coastline including the Carmargue, and a bit of the Rhône River.

I drank wine, ate cassoulet, mingled with riverrains, joined some pagans, and slept with four Frenchmen on their canal boat—it’s a story.

To join the ride go to the Cycling France’s Canal des Deux Mers photo-travelogue. And if you’re keen, listen to a conversation about my journey on the Adventure Bike Touring Why I Bike podcast (45 minutes).