The sign at the entry to Maslin Beach warns you of strong currents, uneven surfaces, and submerged objects. But it doesn’t tell you about the naked people.

Just as Sellicks is the driving beach, Maslin (map) is the unclad beach—or as we say in Vancouver—clothing optional beach.

I visited Maslin with a friend a few days ago. She likes to do a brisk, six-kilometre walk on the beach’s firm sand. It’s only once we got there that I discovered she does it naked.

Me, I laid a sarong out on the sand, pulled off my T-shirt and skirt, and performed a few yoga sun salutations. In my swimsuit. It’s brand new.

Naked woman, naked man, where did you get that nice suntan?*

When I was done with the yoga, I laid back on my elbows and checked out the view. Most of the people walking up and down the shoreline were men. They seemed to be looking for something. There were also men lying in the sand wearing sunglasses.

I saw a few male-female couples. Many of them seemed to be reading books. Most of the women were not naked from the waist down. I found the same phenomenon on Vancouver’s Wreck Beach.

Showing your vulva is just a bit too unclad for some of us.

Me, I’m not embarrassed of my body, but I am modest. I am grateful that I visited beautiful Maslin Beach and that I had the choice to take off my clothes—or not.

It’s New Year’s Eve and a crowd is gathering on the sands of Port Willunga, South Australia.

Rumour has it they’re from the Aldinga Arts EcoVillage down the street. According to their website, they are an intentional community that, “…showcases the exploration of new lifestyles for a more humane, sustainable future.”

They’ve flagged an area of the beach off for sand castles. One of the castles looks like a pyramid. One tanned, face-painted fellow grins and digs at the sand like he is unearthing organic potatoes.

Another man, perhaps in Thai fisherman pants, walks by with an empty wine glass in one hand and what looks like a didgeridu novelty item in the other. He occasionally toots on it plaintively.

After the sun sets, he joins a few other men at the foot of the sandy cliff wall. I hear bongo drums and maybe a gamelan.

There’s a pop and whistle and then all eyes turn to the pyramid. “It’s a volcano!” exclaims a small boy.

It unsettles me the way the Mexican churro-selling Copenhagen café in the German-themed village of Hahndorf in the heart of the British colonist-settled ranges of the Kaurna, Ngadjuri, and Peramangk Peoples’ territories unsettles me.

It unsettles me that way a traveller, visitor and guest should be unsettled.

I try to listen, learn, and make sense of the mish-mashed, mixed metaphor that is contemporary and ancient culture, ceremony, artifice, authenticity and—intention. And it’s one reason I started travelling deep (one place for a longer period of time) rather than wide (many places in a shorter period of time)

But I admit I still can’t make sense most of the time. And I’m learning that is an unsteady-but-acceptable way to be, at home or away.

I can’t help but think of a funny and useful how-to video I watched back in Canada. It was part of CBC’s (Canadian Broadcasting Corporation) podcast on Indigenous culture, Unreserved. The podcast episode was called, Exploring the fine line between appreciation and appropriation.

Now I know why so many Aussies in Canada play hacky sack. It’s their brown balls.

That is, it’s the brown balls of fibrous material that litter beaches in South Australia. They look like naked hacky sack balls, ready to bounce off your ankle.

I recently visited Middleton Beach with my friend Jared. While he sought waves on the water, I scanned the beach for artifacts.

Along with round stones and shards of surf board, there were millions of hairy balls that I affectionately called “beach potatoes.” They were generally smooth, matted spheres that had some heft when you gave them a gentle squeeze.

I did an image search on Google and it led me to a page on Wikipedia for Posidonia oceanica. If the balls I saw on the beach are the same, they are a very common type of sea plant called Neptune Grass.

“It forms large underwater meadows that are an important part of the ecosystem. The fruit is free floating and known in Italy as “the olive of the sea.” Balls of fibrous material from its foliage, known as egagropili, wash up to nearby shorelines.”

And further down in the Wikipedia entry, it says,

“This species is found only in the Mediterranean Sea where it is in decline, occupying an area of only about 3 per cent of the basin.”

All I know is I think these little brown balls are cute—and they probably make awesome hacky sacks. 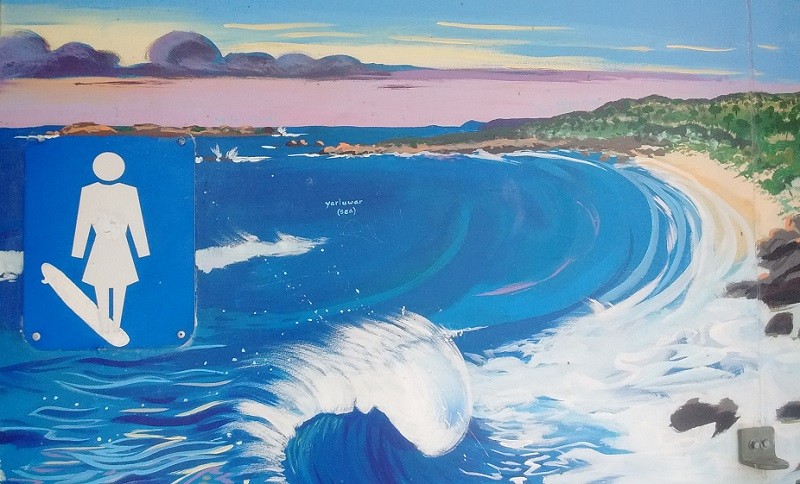 When you arrive, just park off Esplanade. Use the concrete-mounted binoculars to watch the surfers out on the breaks. Follow the stone steps down to the change room kiosk. Wash off your feet if they’re sandy. Pour some water for your dog.  It’s all here.

Turn around and check out the mural. A white figure of a woman on a surfboard points you to the female toilets and change room. How fun is that?

If you need an all-access space, wheel your chair right in. There’s a surfboard for you too.

Here at Middleton, even if you’re not surfing, you can pee like a surfer—on dry land, anyways. 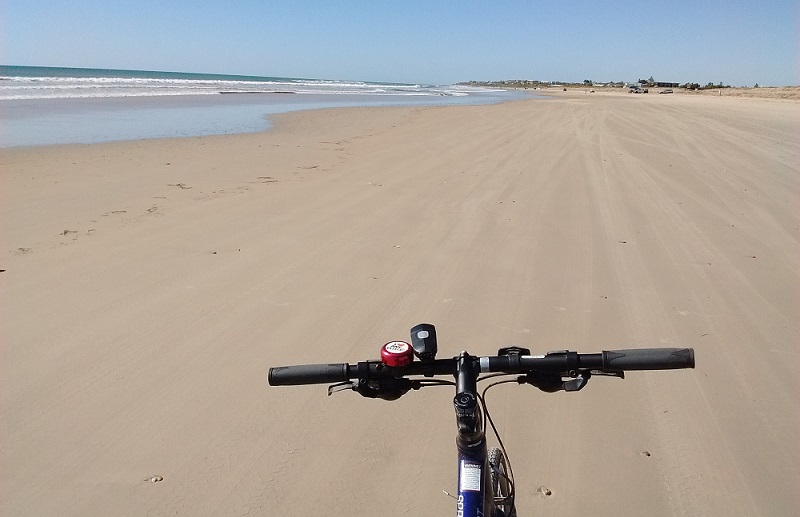 Why drive when you can cycle?

I brought my motorcycle helmet to Australia because I figured it would be hot and hilly. A motorbike would be a great way to beat that. But I didn’t figure how the coastlines, vineyards, and breezy ranges here on South Australia’s Fleurieu Peninsula make me want to go slow, real slow.

Sure it’s 40-degrees Celsius out there, I tell myself. But I’ve done this before: in Baja, Thailand, Cuba, and India. And that was usually loaded with touring gear.

I borrowed a hybrid bike from my host Ruth and set out.

From Willunga I pedaled a zig-zag route to Sellicks beach. Locals know Sellicks as “the driving beach.” You can drive your vehicle right on the sand—albeit at a snail-like ten kilometres per hour. I wheeled the bike onto the beach, climbed on the saddle, and stepped down on the pedals.

The bike rolled as if I was on pavement! Plus, the breeze off St. Vincent Gulf was refreshing with just a hint of a tailwind. It reminded me of a similarly heavenly ride I did cycling on Majorda Beach in Goa, India. I raced past 4-wheel drive cars and SUVs at a blazing 18 kilometres per hour.

I turned off the beach where it turned into a wildlife sanctuary. In the parking lot I took a drink of water and admired a neon-green Kawasaki motorbike on the back of a guy’s pick-up truck. He caught me looking.

“Yeah, thanks.” He looked over, then motioned to a pile of bags in his passenger side. “I broke up with my girlfriend. Hey, where you ride from?” I told him I’d started about 20 kilometres back. He heard my Canadian accent and then asked the usual questions: Where you from? What brings you here? How long you here for?

“I broke up with my girlfriend,” he said again.

“I’m sorry to hear that,” I said as I pointed my bike homewards. “It being Christmas time and all. Good luck to you.”

Later that week, Jared, Ruth, Tilly, and Delilah and I returned to “the driving beach.” This time I was inside an air-conditioned hatchback packed with surf and snorkel gear.

The beach was beautiful the second time around, but it wasn’t as much fun driving on it as it was cycling it.

“Look out for the deep sand, Dad!” called out five-year old Delilah from her booster seat in the back.

I still haven’t decided if I’ll travel around South Australia by motorcycle or bicycle after Christmas. But I’ll keep borrowing bicycles until I decide…

In South Australia, a stairway to heaven goes down, not up.

It starts from a road where you park your sand-carpeted hatchback. There’s a industrial-size tub of SPF50 sun lotion in the back with the towels. It’s got a pump so you can slap it on fast.

Faster than it takes to pull on your wetsuit. It’s thick neoprene rubber and if you’re lucky, you’ve got a buddy nearby who’ll pull the back zip for you. If she’s local, she’ll tell you how the surf looks before you even peer over the rail.

When you do, you see an expanse of blue with strips of white foam. They curl and break like slow-motion music. If you’re a surfer, that’s heaven.

I’m staying in South Australia with Jared Thomas, author of Calypso Summer and Songs That Sound Like Blood. He loves to write. And he loves to surf.

He tells me he’s going to show me how, sometime soon. 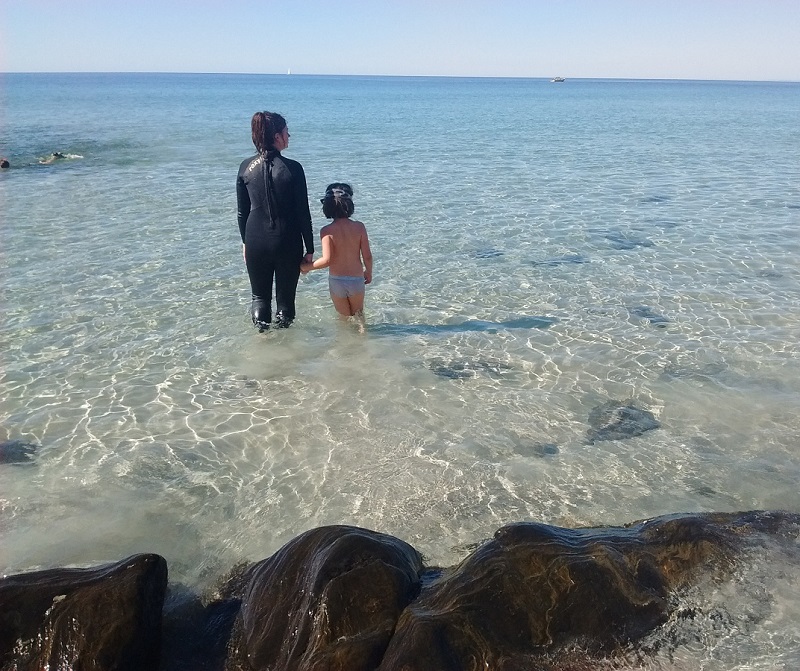 Tilly, Delilah and myself learned to snorkel today, in different ways.

We were at Second Valley Beach in South Australia. The water was a bit cool but the air was still and the sun warm. Tilly and I donned wet-suits and floated in the buoyant, salty St. Vincent Gulf.

I came back to the beach, eager to peel off my neoprene suit and sit on the soft sand. Five-year-old Delilah was patiently waiting there for one of us to come back.

Delilah’s graduated to “Starfish” level in her swimming classes and I asked if she’d keep me company in the clear, sandy shallows. She was justifiably doubtful of the undertow at first but I held her hand and we waded in slowly.

In a little while her sister Tilly returned and asked Delilah if she’d like to try the snorkel mask.

Slowly the two of them made their way into deeper water and Tilly coaxed her to slip on the mask and then lower her face in the ocean. It was just in time for her dad to proudly witness the big moment. He had been snorkeling in the deeper blue of the cove.